Enter a search term into the form below to search the site; to search a specific phrase please include that phrase within quotation marks (eg "Second successive victory for Marianne Vos"), or alternatively simply enter specific words to find all instances of those words. 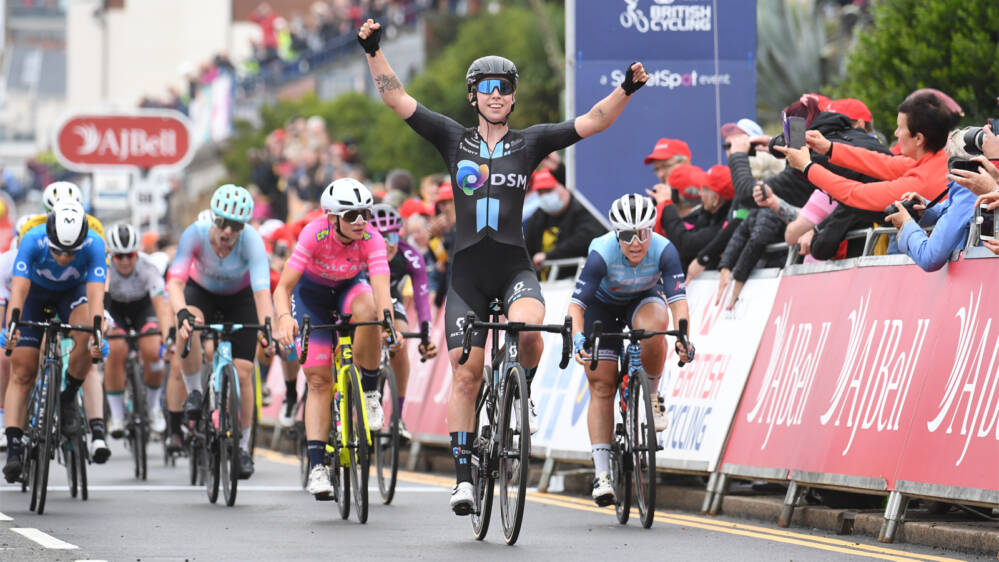 The Dutch rider produced a dominant sprint finish along Westcliff’s Western Esplanade in front of a huge crowd to take victory ahead of Chiara Consonni (Valcar – Travel & Service) and Trek – Segafredo’s Chloe Hosking.

At 22 years old and on debut in the race, Wiebes becomes the third youngest stage winner in AJ Bell Women’s Tour history.

“The win means a lot,” said Wiebes. “We really went for this win.  Pfeiffer Georgi was really close at stage two so I’m really happy for the team that we took it today. I lost the girls [in the final kilometres] but I found my own way in the peloton. At the end I was in the wheels of Valcar and I opened up my sprint with 150 metres to go and, yeah, it was good!”

Departing from Shoeburyness’ East Beach, the opening hour of racing was run off at over 42kph before a breakaway could stick. First, Janneke Ensing (Team BikeExchange) went solo before sitting up after the first Eisberg sprint at Burnham-on-Crouch, before Movistar’s Lourdes Oyarbide attacked midway through the stage. She built up a maximum advantage of one-minute.

The Spaniard was caught with 37 kilometres to go and, with the pace high in the peloton, even a flurry of attacks on the short ŠKODA Queen of the Mountains climb of Hambro Hill on the outskirts of Southend-on-Sea couldn’t prevent a sprint along Westcliff-on-Sea’s Western Esplanade.

Initially latching onto Consonni’s Valcar – Travel & Service team lead-out, Wiebes opened her sprint with 150 metres to go, powering through for her first win since July’s Giro Rosa. Behind, Vollering’s first day in the AJ Bell leader’s jersey ended without drama.

“My team stayed on the front and really controlled it, so that was nice,” she said. “A lot of other teams wanted to sprint here, so we were not the only ones who wanted to keep together. That made it a bit more easy for us. We have a really strong team here so I think that we will be fine [for the next two days].”

Thanks to her fourth place on the stage, Sheyla Gutierrez (Movistar Team) took the lead in the Sigma Sports points competition. The standings in the other two classifications remain unchanged: Elisa Chabbey (Canyon SRAM Racing) continues to wear the ŠKODA Queen of the Mountains jersey, while Nina Kessler (Team TIBCO Silicon Valley Bank) extended her lead in the Eisberg sprints jersey.

Highlights of stage four are on ITV4 at 8pm and available on demand via the ITV Hub.

The AJ Bell Women’s Tour is sponsored by AJ Bell, one of the UK’s leading online investment platforms, helping people invest for the long term via ISAs, pensions and general investment accounts.  It has a rich history of supporting elite level sport including badminton, cricket, rugby, squash and triathlon, and recently sponsored the men’s AJ Bell Tour of Britain in September, won by Wout van Aert.

Stay up to date with all the latest tour news

Partners of the Race